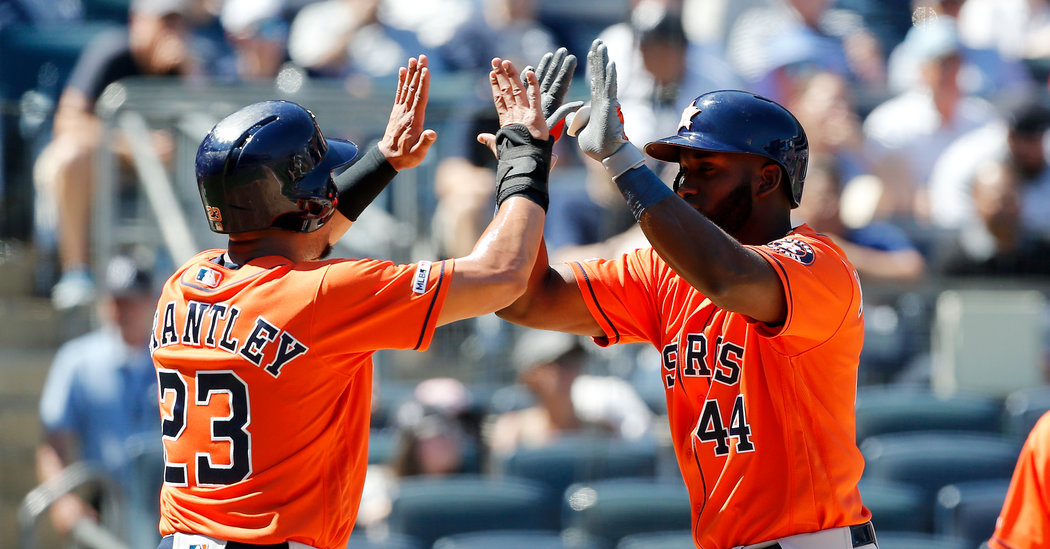 The greatest reliever in major league history closed down a victory in the Bronx on Sunday. Unfortunately for the Yankees, Mariano Rivera did this in the old-timers’ game. His save did not count, nor did his inside-the-park home run off Scott Kamieniecki, the only home run he can ever remember hitting.

“Are you kidding me?” Rivera said later. “Not even in softball.”

The Yankees did slug an official homer — by D. J. LeMahieu — for the 26th game in a row, the longest home run streak in franchise history, but the Houston Astros clubbed four and prevailed, 9-4. The Yankees had won eight in a row before Sunday and have a nearly identical record to the Astros: 49-28 for the Yankees, 49-30 for Houston.

The teams will not meet again in the regular season, and by winning on Sunday, the Astros took the season series with the Yankees, four games to three. If the teams finish with the same record and meet in the American League Championship Series, the Astros will have home-field advantage — just as they did in 2017, when the home team won every game of a seven-game thriller.


“Probably a good chance,” the Astros’ Justin Verlander said, referring to a rematch this fall, after fanning nine Yankees in seven stout innings. “We’ve put ourselves in a good position to do so, both teams. In this landscape of teams not trying to win and a few teams trying to win, I think we both kind of had an idea early on that we’ve got to see how we match up.”

The Astros were missing two of their best hitters for this series, the injured Carlos Correa and George Springer, and their No. 2 starter, Gerrit Cole, did not pitch. But they gave their slugging rookie, Yordan Alvarez, his first look at Yankee Stadium, and he homered for the third time in the four-game series.

“His bat is special,” Verlander said. “His pitch recognition, his approach at the plate is so far advanced for his age.”

The Yankees’ reinforcements have made a similar impact, of course, ensuring that the team will be in first place in the A.L. East when it meets the Boston Red Sox in London this weekend. But for all the good vibes, the uninspiring rotation is concerning.

Sunday’s starter, J. A. Happ, has a 5.23 earned run average. He allowed 11 hits (including three homers) in just four innings, an unusual cocktail of numbers to see in a box score. The last two Yankee starters to allow so many hits and homers in so few innings, according to Baseball-Reference, were Bob Turley in 1962 and Roger Clemens in 1999.

The Yankees won the World Series in both of those seasons, but they have not done so in a decade. They will turn again this fall to their usual formula: hitting lots of homers and packing Rivera-like dominance into the last few innings. The plan — especially the latter half — could work.

Piniella would know. When he managed the Cincinnati Reds in 1990, he used an extraordinary bullpen — led by Norm Charlton, Rob Dibble and Randy Myers — to win a championship. The Yankees hope their own version of the Nasty Boys — Adam Ottavino, Zack Britton and Aroldis Chapman — can give them the same kind of edge this October. That trio held the Astros scoreless in the series.

“Their bullpen is really good, obviously,” Astros Manager A. J. Hinch said. “They have an answer for everything.”

In those pesky first few innings, though, the Astros have a clear advantage. In a potential A.L.C.S., the Astros could start Verlander and Cole — the major leagues’ strikeout leader — for at least four of a possible seven games. The Yankees’ best starters have been Masahiro Tanaka and James Paxton — very good, to be sure, but not as intimidating. Both teams seem likely to add a starter before the July 31 deadline, but the Yankees have the greater need.

In assessing the Yankees on Sunday, Hinch praised their quick-strike offense and their ability to handle right-handers despite being heavily right-handed. But he added an insight that could be the biggest separator between the teams.

“There’s some swing-and-miss in there,” Hinch said, “and they’ve got some holes.”

LeMahieu, a contact hitter with thump, is a treat to watch in this era of whiffs. But too many of his teammates are prone to striking out, while the Astros have a bunch of hitters who make contact and slug. This is how Boston won the World Series last year, and how Houston did it the year before.

For the Yankees’ luxury bullpen to take over a series in late October, they need to have leads to hold. Can the starters give them that chance, and can the offense make enough hard contact against pitchers like Verlander? It is far too early to know, but another chance to try would be fascinating.