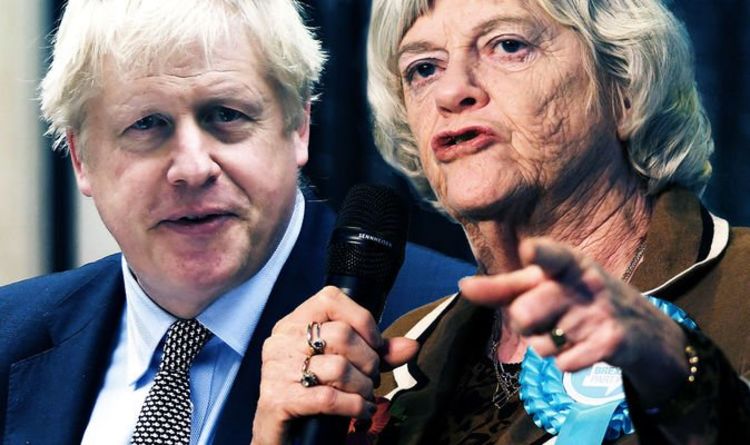 Speaking to LBC radio, Ann Widdecombe claimed the Tories would be “daft” to continue to reject an election alliance with the Brexit Party in Labour Leave seats represented by Remain MPs. She said: “We are running out of time. Nominations close next week. This is entirely now in Boris‘ court, it’s not in Nigel’s court.

“By standing in seats, whereas I say they wouldn’t vote Tory, and if the Tories are daft enough to split the votes in those seats, well, that’s down to them.

“And the same is true in Britain in reverse. The Tories came very close, we got a few thousand votes, but we trailed. Now, if they could have had our votes, they would have won.

“That is the sort of pact we’re talking about.”

READ MORE: Brexiteers club together to weed out anti-Brexit MPs in election

But her call comes as Brexiteers are urging Nigel Farage to withdraw Brexit Party candidates at the upcoming December election.

The Brexit Party leader has been warned his party could split the Leave vote and end up blocking Britain’s departure from the European Union.

One former candidate is urging colleagues to stand down or risk denying Boris Johnson a majority on December 12 and increasing the “hideous” prospect of helping Jeremy Corbyn into Number 10.

Philip Walling, who has pulled out of the battle for the Workington seat in Cumbria, said: “I plead with every other Brexit candidate to do what I have done: examine your conscience in the cold light of reason.

“And if you think you risk splitting the Tory vote, and so damaging the best chance of Brexit that Britain has got, then for God’s sake – stand down.”

He said his party will stand at least 600 candidates in the General Election unless the Prime Minister removes the allowance for the Brexit transition period to last until 2022.

Mr Farage had vowed to contest all 650 seats unless Mr Johnson ditched his Brexit deal but has since been urged to focus on a smaller number of Leave-backing areas. Referring to the Tory refusal to strike a deal with his party, Mr Farage said: “It’s not too late for Boris.

“He hasn’t launched his manifesto, a general election is a chance to press the reset button.

“I’d love to see him move from where he is.”

Asked if Brexit Party candidates would pull out, Ann Widdecombe said she was at a conference on Monday where there 450 candidates and “there was no suggestion they are pulling out”.

admin - 07/08/2019 0
We use cookies to ensure that we give you the best experience on our website. If you continue to use this site we will assume that you are happy with it.Ok