Halle Berry, 53, unveils her ripped abs after getting into the best shape of her life for MMA movie Bruised: ‘It feels unbelievable!’

By Marisa Okano For Dailymail.com

Halle Berry is in the best shape of her life at 53.


The Oscar winner lifted up her shirt to reveal a set of rock-solid abs in a new Instagram photo she shared on Friday.

The mother-of-two has been working hard to get in shape for her new project Bruised, a MMA film she is both directing and starring in. 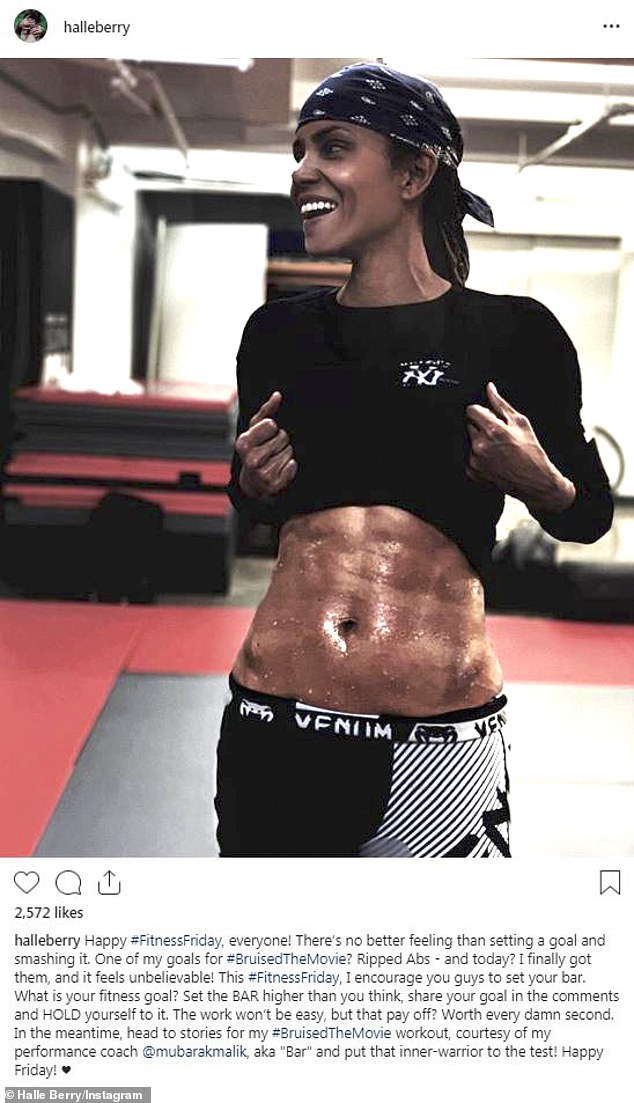 Ripped: Halle Berry lifted up her shirt to reveal a set of rock-solid abs in a new Instagram photo she shared on Friday

Berry captioned the Instagram photo: ‘Happy #FitnessFriday, everyone! There’s no better feeling than setting a goal and smashing it.

She went on to push her followers to follow suit and focus on their ambitions, too.

‘One of my goals for #BruisedTheMovie? Ripped Abs – and today? I finally got them, and it feels unbelievable! This #FitnessFriday, I encourage you guys to set your bar. 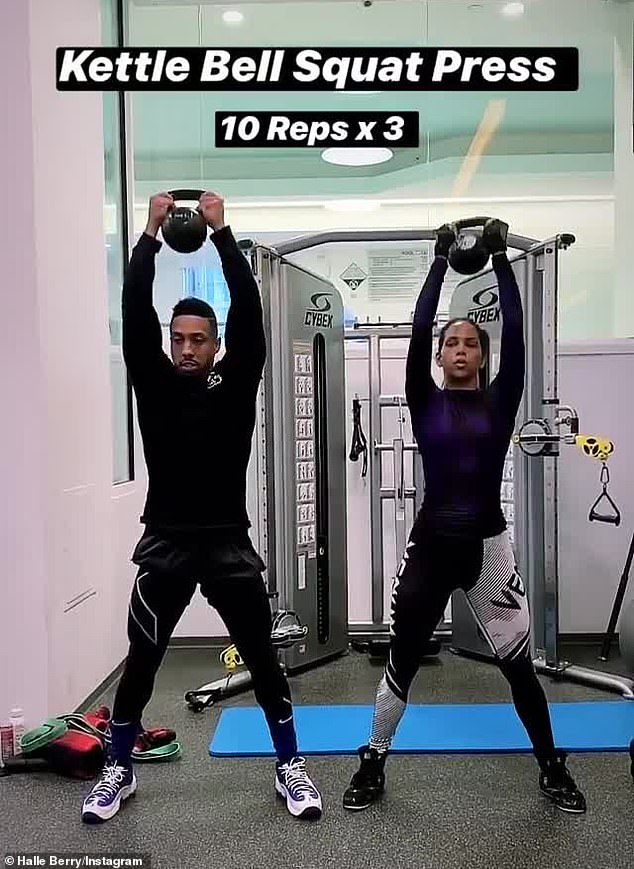 Working it: The 53-year-old has been training with performance coach Bar Malik (pictured)

‘What is your fitness goal? Set the BAR higher than you think, share your goal in the comments and HOLD yourself to it. The work won’t be easy, but that pay off? Worth every damn second.’

Berry then invited her 5.7M followers to check out her Instagram Story for a glimpse at her routine curated by performance coach Bar Malik.

The Instagram Story includes a showcase of a vitamin D-enriched drink Berry has come to rely on as well as some shots of her killing it on the kettle bells. 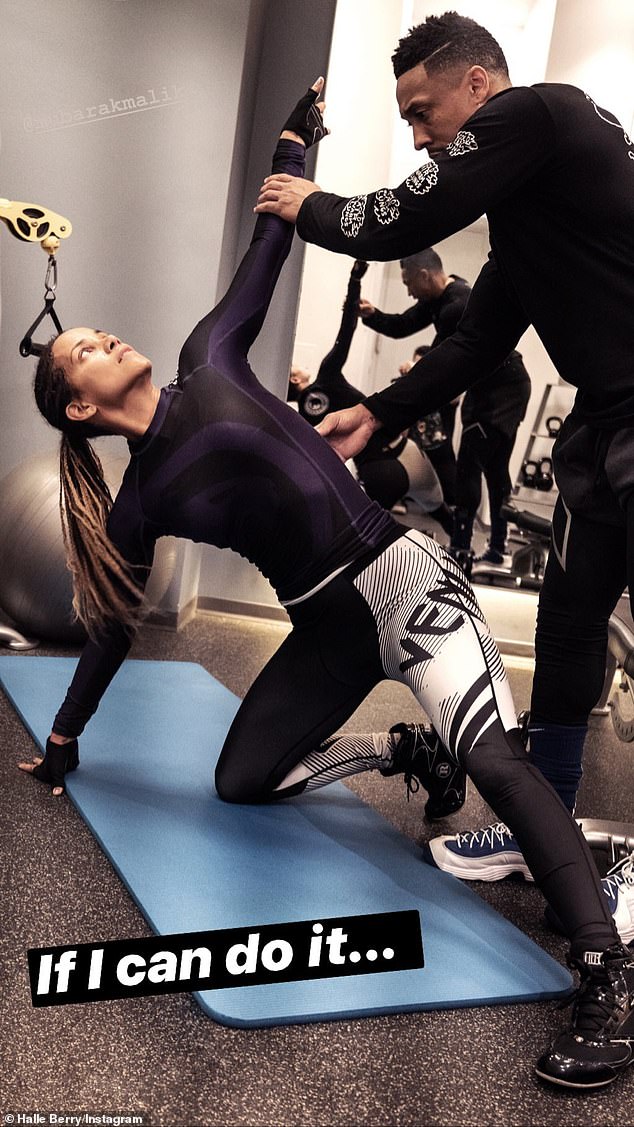 Full force: Berry Insta-storied an image of Malik helping her stretch on a mat

Earlier this year it was reported that recent UFC featherweight title challenger Brian Ortega had also been appointed to get Berry whipped into shape for the film.

‘Of course, because it’s Halle, we’re not going to fight. But the whole thing is, jiu-jitsu is a beautiful art. (It’s one of) those few arts you can go 100 percent and not get hurt. 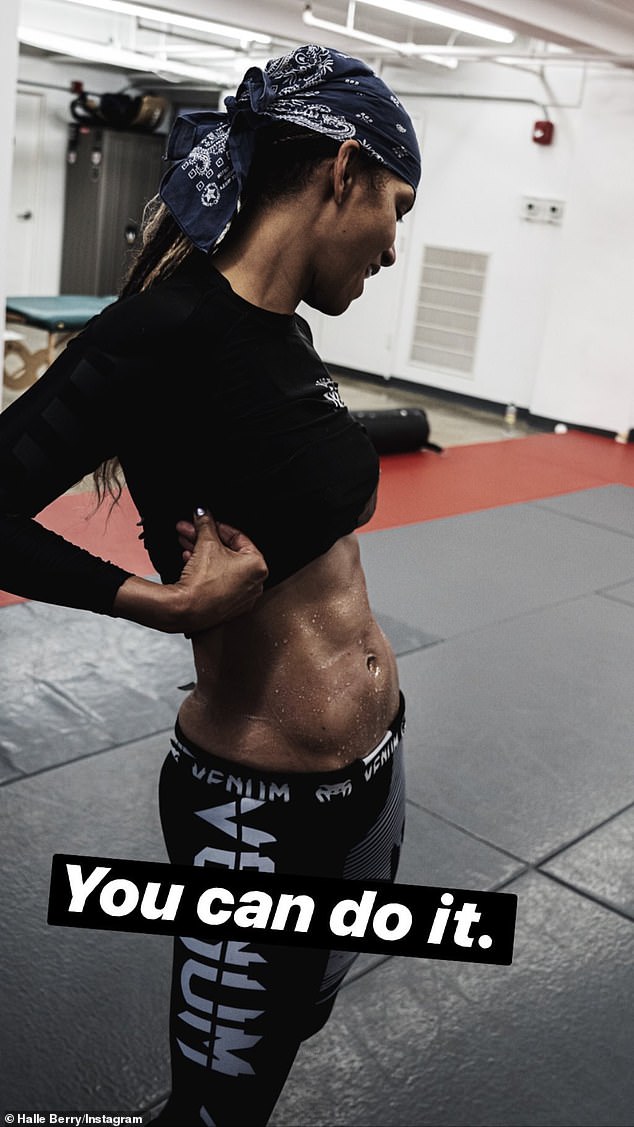 ‘So my main goal is to get her jiu-jitsu looking dope as f*** … We’re going to see some cool-ass things in (the movie). We’re going to drill her hard,’ he continued.

In Bruised, Berry will play a former MMA fighter named Jackie Justice ‘who has failed at the one thing she’s ever been good at – fighting.

‘When 6-year-old Manny, the son she walked out on years ago, returns to her doorstep, Jackie has to conquer her own demons, face one of the fiercest rising stars of the MMA world, and ultimately fight to become the mother this kid deserves,’ according to a synopsis via Deadline Hollywood.

In addition to an Oscar, Berry boasts two Screen Actors Guild awards, a Golden Globe and an Emmy.

She juggles her workload with parenting 11-year-old daughter Nahla and six-year-old son Maceo. 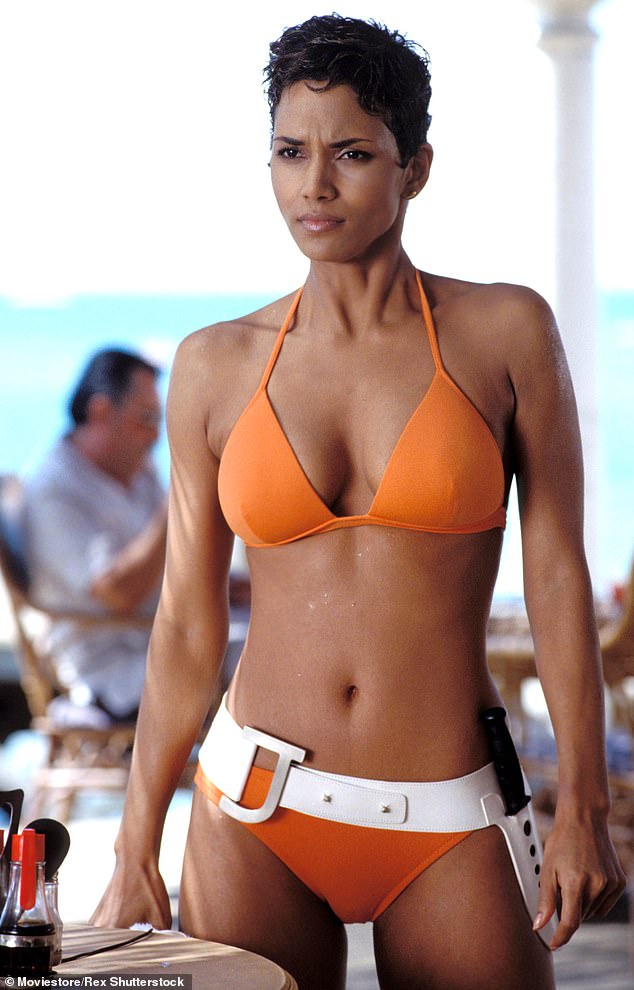 Way back when: Berry also garnered attention for her chiseled fame in 2002’s Bond film Die Another Day