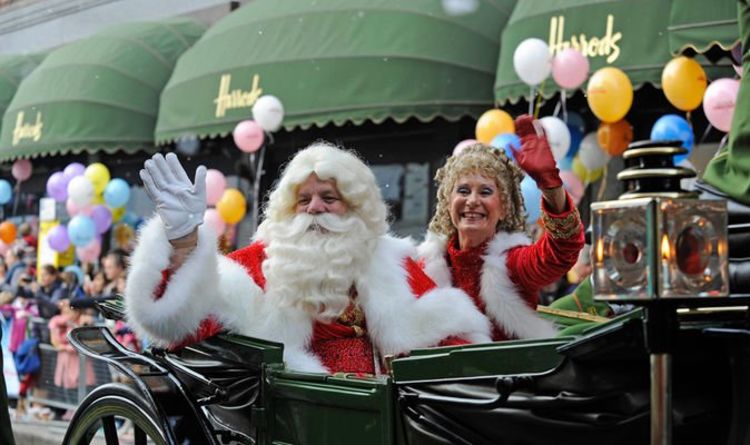 The flagship Knightsbridge shop has been accused of “behaving like the Grinch who stole Christmas” over its high spend threshold for families who want to book a 10-minute slot in the festive grotto. Shoppers with a Green tier 2 or above Harrods Reward card can bring their children to meet Santa in his Swarovski crystal-adorned wonderland but parents who have not forked out thousands of pounds on luxury goods face a near-total ban. Loyal customers who have visited the 170-year-old shop every year to see Father Christmas expressed anger over the move and Harrods responded by allowing 160 lower paying families to book a slot.

But with Santa due to spend five-and-a-half weeks in the shop, seeing a total of 4,400 families, it means the children of less well heeled mums and dads will account for just 3.6 percent of the overall number of visitors.

James Browne, 40, has visited Santa at his Harrods’ grotto every year since his 15-year-old son Toby was a baby.

He told the Guardian: “Harrods is behaving like the Grinch who stole Christmas.

“They have lost the true meaning of Christmas and given into the commercialisation of the season.

“Visiting Father Christmas shouldn’t be reserved for those that are fortunate enough to frequent the store and spend thousands of pounds.”

He urged the owners – Qatar’s billionaire royal family – to take a “long hard look” at how such a move could impact their business for the generation of London children who will not grow up looking kindly on their store.

READ MORE: Is the era of the grand British department store over?

At the time Father Christmas told the Harrodian Gazette: “Christmas is for children, first and foremost.

“I help keep the spirit of Christmas alive, which is very important.”

On its website Harrods promotes the grotto as “a special place in the memories of everyone who comes to visit”.

The stores claims “for over 60 years, Harrods has been the home of Father Christmas in London”.

A spokeswoman for Harrods said: “The Harrods Christmas Grotto is offered by invitation only to Harrods Rewards customers in recognition of their loyal custom throughout the year.

“Due to demand, we invite Harrods Rewards customers who are Green tier 2 and above the opportunity to book tickets.”