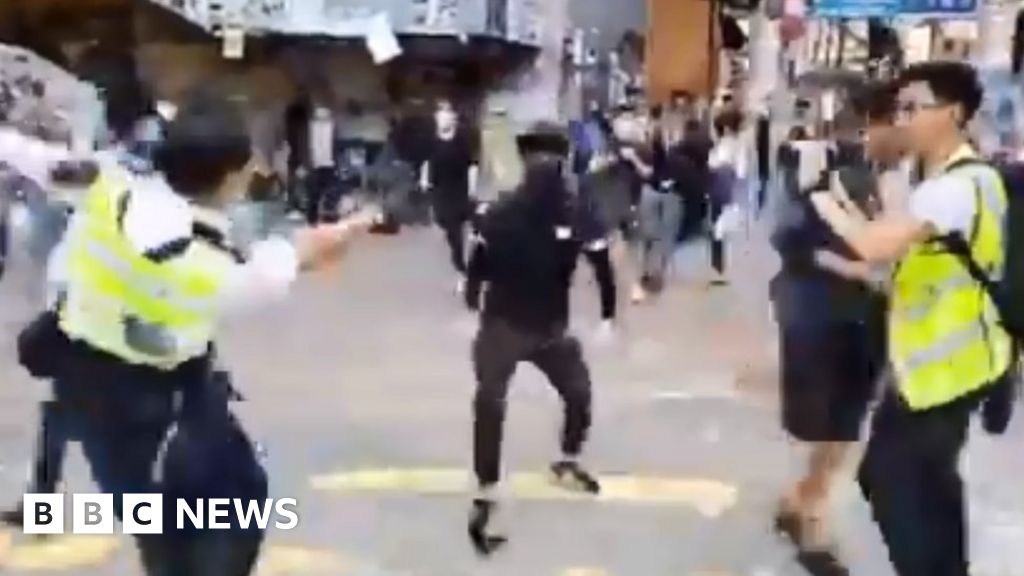 A policeman has shot at least one person in protests during Monday morning rush hour in Hong Kong.

Footage shown live on Facebook showed the officer drawing his gun before grappling with a man at a roadblock.

Another man, wearing a face mask, then approaches and the officer shoots him, hitting him in the chest or torso.

As the grapple continues, the officer fires another two rounds – although it’s not clear from the footage whether the bullets hit anyone.

The condition of the first person shot is not known.

It’s thought to be the second time police have shot someone with live rounds since the Hong Kong protests began in June.

The first incident was during protests on 1 October when China was celebrating 70 years of communist rule.

The Monday morning shootings happened as protesters tried to block a junction at Sai Wan Ho on the north-east of the island.

The latest violence comes after a student died on Friday after falling from a ledge in a car park, reportedly trying to flee from police tear gas.

Why are there protests in Hong Kong?

Hong Kong is part of China but as a former British colony it has some autonomy and people have more rights.

The protests started in June against plans to allow extradition to the mainland – which many feared would undermine the city’s freedoms.

The bill was withdrawn in September but demonstrations continued and now call for full democracy and an inquiry into police behaviour.

Clashes between police and activists have become increasingly violent and in October the city banned all face masks.

admin - 31/10/2019 0
We use cookies to ensure that we give you the best experience on our website. If you continue to use this site we will assume that you are happy with it.Ok