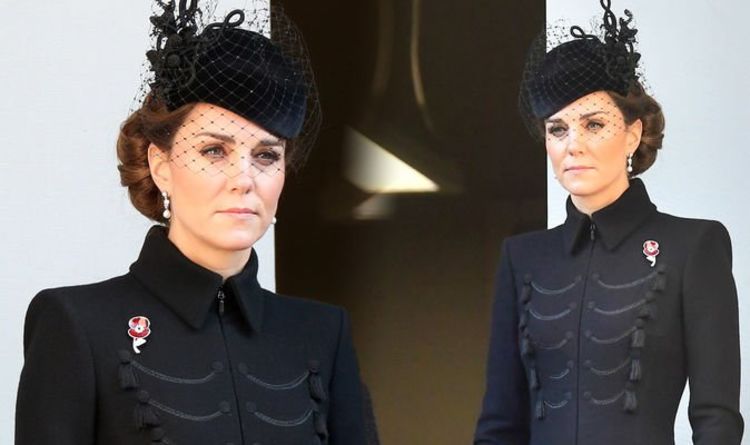 Kate Middleton looked sombre in head to toe black to attend the National Service of Remembrance today. She joined other members of the Royal Family for the service which took place at the Cenotaph in Whitehall. The Duchess of Cambridge wore a black coat dress and matching lace fascinator as she stood with the Queen and Camilla, Duchess of Cornwall, on the balcony.

The Duchess stayed warm as she kept the jacket zipped up to the collar.

She was spotted consoling the Queen as the royals paid their respects for Remembrance Sunday.

Kate wore a small black fascinator which had a twisted pattern and netting which partly covered her face.

Her hair was pulled back off her face and pinned into a low bun.

The Duchess opted for a natural makeup look with brown eyeshadow and light brown lipstick.

She wore a stunning pair of drop pearl earrings which could be seen glittering as she stood on the balcony.

Usually wearing three poppies on her outfit, Kate opted for a small metal poppy instead on the left size of her coat.

Her hair was styled into a bouncy blow-dry and kept off her face by a jewelled black headband.

She completed the look with a pair of closed toe black high heel shoes.

How did Kate Middleton become a royal?

Kate Middleton, or Catherine, Duchess of Cambridge, was born on 9 January 1982 at the Royal Berkshire Hospital, Reading, England.

She was born to Michael and Carole Middleton, a former flight dispatcher and air hostess. The couple founded a party supplies company, Party Pieces, in 1987 – now estimated to be worth £30 million.

Kate has a younger sister Pippa Matthews, 34, and a younger brother James Middleton, 31.

Kate and her family moved to Amman, Jordan, in 1984, where the future Duchess was educated at an English-speaking nursery school.

After moving back to Berkshire the family sent Kate to private school, St Andrews School. She went on to briefly study at Downe House before moving onto Marlborough College where she boarded.

For university the young Kate attended the University of St Andrews in Fife, Scotland. Here she was awarded an undergraduate MA (2:1 Hons) in history of art.

Kate met Prince William when they were both studying at St Andrews, and both living in St Salvator’s Hall. Famously, William reportedly took a fancy to Kate after she wore a see-through dress during a fashion show.

In 2003 the couple began dating and lived together during their second year of university.

The couple split in April 2007, however, in October they were back together.

Prince William proposed to Kate Middleton with his late mother Princess Diana’s engagement ring in October 2010. The couple were holidaying in Kenya at the time.

On 29 April 2011 they married at Westminster Abbey with a whopping 26 million watching the event live.

Kate wore an Alexander McQueen dress worth a reported £250,000 on the big day.

admin - 10/05/2020 0
We use cookies to ensure that we give you the best experience on our website. If you continue to use this site we will assume that you are happy with it.Ok