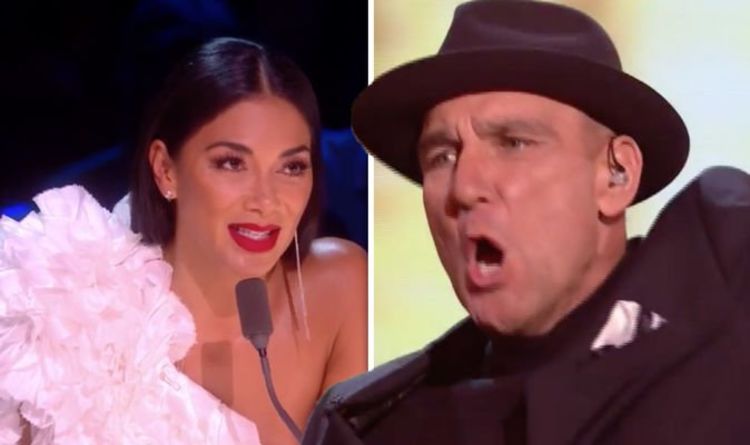 Vinnie Jones took to the X Factor: Celebrity stage this evening to give a heart-felt rendition of Madness’ It Must Be Love. During his performance on the ITV show, he pointed up to the sky and opened his arms out wide. Afterwards, the Hollywood star was praised by Nicole Scherzinger for his touching tribute to late wife Tanya.

While singing for his chance to progress in the competition, the former footballer gestured to the sky to signal he was dedicated the lyrics to Tanya.


Vinnie then went into a rendition of another Madness classic and raised the roof with House of Fun.

Once he’d performed, Nicole commented: “I especially loved the beginning part because obviously we know how much it meant to you, who you were singing it to.”

As Nicole tried to finish giving Vinnie her view on his performance, Louis Walsh told her to push the golden buzzer and send him through to next week.

“Do the right thing Nicole,” the X Factor judge whispered.

“It was a very earnest and sincere performance,” Nicole continued before stopping in her tracks.

“Vinnie needs to win this! Nothing beats a bit of madness #XFactorCelebrity,” another added.

“Vinnie Jones… You are literally the best!! You have to win!! #XFactorCelebrity,” a third tweeted.

However some fans felt Nicole was ‘“pressured” into giving Vinnie her safe seat.

One wrote: “Ngl it looked like Nicole was pressured into giving Vinnie the seat. Yeah it was an amazing act and she was clearly impressed by it but it didn’t look like she wanted to give him the seat when someone shouted behind her ‘do the right thing’ #XFactorCelebrity.”

Another added: “Anyone else think it was out of order how pressured @NicoleScherzy was to give Vinnie that safe seat?! She clearly didn’t want to! #XFactorCelebrity.”

“Nicole clearly wasn’t keen on giving Vinnie her safe seat, yet the other judges pressured her in to doing it… Again #XFactorCelebrity.”

Meanwhile Megan McKenna is the hot favourite to win the competition and bag herself a record deal.

With odds of 4/6, Alex Apati of Ladbrokes said: “It’s hard to see anyone stopping Megan and her odds are only shortening as we edge closer to the final.”